There are two generic research directions that my group is interested in: quantum transport of correlated electrons (or positively charged ‘holes’) in low dimensional semiconductor quantum structures, and novel nanoelectronic devices. Through new experiments on structures with high quality, we address key (either fundamental or practical) issues in these two areas which are at the heart of condensed matter physics and nanotechnology. For our work, material synthesis and electrical charaterization are performed in our lab at A.W.Smith 419. The nano-device fabrication is done at the MORE center. 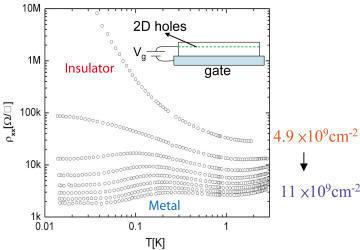 The quantum nature of electrons leads to an interesting situation that electrons in structures with small (but finite) length scale can be viewed as low dimensional systems (e.g. two-dimensional (2D) electrons in nanometers thick semiconductor quantum wells). Electrons in semiconductor nanostructures can take various intriguing phases due to the interplay between the quantum (wave like) nature of electrons, the Coulomb interactions between them and the low dimensionality. We use low temperature electrical transport and tunneling measurements to investigate the nature of 2D electrons/holes in quantum wells or 1D electrons/holes in nanowires. As an example, the figure on the left shows a metal-to-insulator (MIT) phase transition in strongly interacting 2D holes in a GaAs quantum well sample. For 2D MIT physics study, we collaborate with Dr. Loren Pfeiffer at Princeton University who makes GaAs 2D structures with the highest mobility known to mankind. We are currently looking for a motivated student or postdoctoral candidate to work on this area. This project is funded by NSF through grant # DMR-0906415.

Conventional electronic devices use the charge of flowing electrons to realize computation and information processing. The concept of incorporating the spin degree of freedom of electrons into the device functionality opened up a new area termed ‘spin-electronics’ (or ‘spintronics’). Much attention of forefront spintronics research has been focused on how to create and control spin polarized current in semiconductors. Recently, researchers have achieved some success in doing so in bulk or thin-films of semiconductors. We are investigating if one can electrically inject, control and detect spin polarized current in high mobility semiconductor nanowires by ferromagnetic contacts. Here, we focus on semiconductors with strong spin-orbit coupling (e.g. InAs, InSb) and topological quantum materials with unique spin properties (e.g. Bi2Se3). We believe that exploiting the spin degree of freedom and spin-orbit coupling enabled control of spin in high quality nanowire materials will open up many new opportunities in studies of mesoscopic physics, nanoelectronic devices and quantum computing. 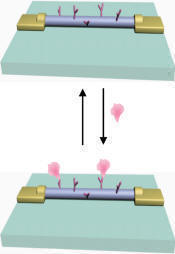 It has been recently demonstrated that nanowire field-effect- transistors can work as sensors to detect extremely low concentration (fMs) of biological molecules in solution. This is intimately related to the small diameter (~10nms) and high quality of semiconductor nanowires. Further development and understanding of such sensors would be essential for the emergence of new technologies in disease diagnostics and drug screening. We are developing chemical and bio-molecule sensors based on nanoelectronic devices (nanowire transistor, nano-capacitors etc). Our focus is placed on understanding the sensing mechanism and biomolecular reaction dynamics at nanosensor surfaces. I also have interest in using nano-electronic devices in biophysics research, single molecule study of biomolecular reactions, to give an example. This research is highly interdisciplinary and can lead to exciting advancements in multiple areas including bio-physics, surface chemistry, and biotechnology.

Thermoelectric materials can generate electrical power when a thermal gradient is imposed along the sample, providing a means to convert thermal energy into electricity. Thermoelectrics has been studied since the 1960.s but so far has received limited application because of the low efficiency. In recent years, there has been a growing interest in thermoelectric applications of nano-structured materials, in which the electrical and thermal properties (electrical conductivity, thermopower, and thermal conductivity) can be tailored through proper material design. We are experimentally studying nanowires as thermoelectric materials for efficient energy conversion. The expected results will advance our understanding of the effect of low dimensionality on the thermoelectric energy conversion efficiency, and provide guidelines for developing new nanomaterials-based thermoelectrics as an alternative energy source. This project is funded partly by ACS Petroleum Research Fund through grant #48800-DNI10. 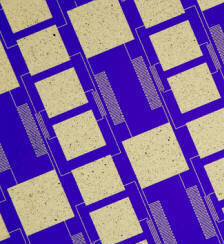 Collaborative research with other research groups

We have collaborations with the following research groups:

We acknowledge the following funding sources for supporting our research.